We will continue our efforts and prayers to restore the salmon and bring them home. We are inviting the public to join us virtually.

The Salmon Will Run!

Salmon, known to the Winnemem Wintu as Nur, bring essential nutrients to the waterways, forests, and lands and are considered a relative. However, since the Shasta Dam was built 75 years ago, the salmon have been unable to return to their home waters in our ancestral watershed near Mt. Shasta, California. Now, the only remaining genetic descendants of these salmon are living in New Zealand, where we have been in relationship with the Maori in creating a plan to bring them back to their home waters.

Beginning in 2016, Winnemem Wintu Chief Caleen Sisk along with our tribe and the support of a collective of Indigenous women, activists, and allies have been carrying out a journey that follows the historic pathway of our salmon in efforts to lay down prayers for their return as well as to raise awareness about the policies and issues threatening water, fish, and Indigenous life ways.

This 300-mile trek on foot, bicycle, canoe, and horse spans over several weeks and travels between the Winnemem Waywaket (McCloud River) to the Bay-Delta Estuary at the Ohlone site, Sogorea Te (Glen Cove, Vallejo, Ca).

This prayerful journey raises awareness about the importance of protecting our waters, restoring our salmon runs and revitalizing our Indigenous lifeways.

Our waters, our fish, and Indigenous ways of life are all under attack. The U.S. Bureau of Reclamation , Westlands Water District, and Senator Dianne Feinstein plan to raise the height of Shasta Dam by 18.5 feet. Gov. Jerry Brown of California wants to build two giant tunnels through the Sacramento-San Joaquin Delta that will divert our fresh water from the Sacramento River for the GMO Agricultural industry and have the potential of diverting every drop of fresh water from the Sacramento River. If they build these tunnels and raise the dam they will kill the largest estuary on the Pacific coast, inundate future spawning grounds on the Winnemem Waywaket (McCloud River), and flood Winnemem Wintu sacred sites. These projects will destroy sacred ceremonial places, poison the soil, and destroy unique habitat that is essential for salmon as well as other plants, birds, and marine life.

WHAT ARE WE DOING?

After 4 years of traveling this journey upstream, in 2020 we renewed a 4 year commitment and began to reverse the direction of the prayer journey, following the path of baby salmon to the ocean. The journey now begins on the Winnemem Waywaket (McCloud River), where the salmon once spawned in their ancestral spawning grounds before Shasta Dam was built. We’ll travel down the Sacramento River along the Bay-Delta Estuary and end  at Sogorea Te (Glen Cove, Vallejo, Ca).  As we run, we will be praying to bring balance to the rivers of California and to all of the waters of the world, which are connected.

Our salmon play a vital role in keeping our waters and forests healthy. We will be laying down blessings along the route they will take once we bring them back from Aotearoa, New Zealand. This is a ceremonial way of bringing Salmon home, who have historically been the keepers of the water, and whose jobs are essential to keeping our waterways healthy for human life and for all other life that depends on these rivers.

To ensure the safety of our communities, we are inviting the public to join us virtually again in this year’s prayer journey.

How you can participate:

We are so grateful for your support and we look forward to seeing you at Run4Salmon in the future. 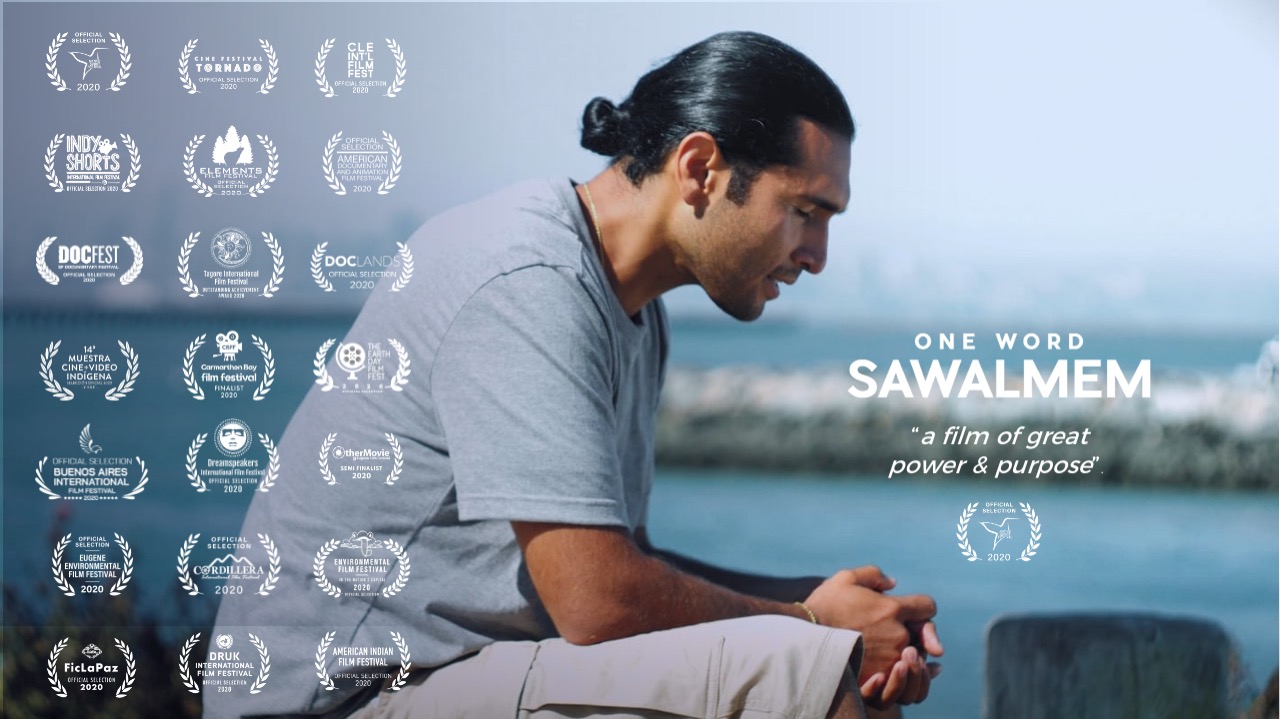 Run4Salmon friends have been gifted the opportunity to view and gain 5 day access (beginning at the time of your choosing) to the film, One Word : Sawalmem, an uplifting, internationally-acclaimed, Native-directed short film that’s good for the whole family to watch.

The 20-min film is based on one single question: What’s one word from your sacred language that changed your life and that you can offer to the next generation as medicine to heal our relationship with the Earth?

Michael “Pom” Preston of the Winnemem Wintu tribe of Mt. Shasta, son of spiritual leader Chief Caleen Sisk, didn’t hesitate to choose his word, Sawalmem.  Sawalmem is sacred water.  Through this word, he takes us into a rare, intimate, current-day personal portrait of what life is like when you consider water as sacred.Winner of multiple awards, finalist of the short documentary program of the Tribeca Film Institute and selected for 40 festivals around the world, the film is now yours to watch.

Friends of Run4Salmon, Get instant access to watch the 20 min film here.

Chief Caleen Sisk Speaks at the Run4Salmon Fundraiser, May 2021